Item number: 037
Item title: Let's print flesh!
Author(s) of the item: Paul B. Preciado
Entry of the item into the inventory: 06 april 2017
Inventor(s) for this item: Possible Bodies

"Masculinity and femininity, heterosexuality and homosexuality are not natural laws but contingent cultural practices. Body languages. Aesthetics of desire. The possibility of designing and printing our sexual organs will confront ourselves with new questions. Not only with which anatomic sex we were born, but what sex we want to have. Just as we trans bodies decide intentionally to introduce hormonal or morphological variations that can be recognized exclusively as masculine or feminine depending on gender binary codes, it will be possible to implant a multitude of sexual organs in a body. It will be possible to have a penis with a clit or none of them, or a third arm instead of a penis, or a clit in the solar plexus or a sexualized ear consecrated to aural sex pleasures. The time of countersexual aesthetics will arrive, not defined by the laws of sexual reproduction or political regulation but for the principles of complexity, singularity, intensity and affect."

... and translated to Spanish in Parole de Queer: http://paroledequeer.blogspot.com.es/2017/02/paul-b-preciado.html#more 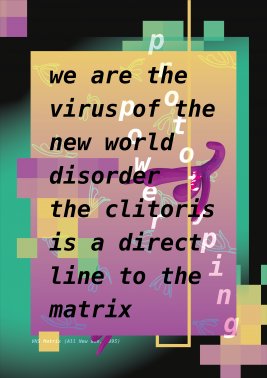