Item number: 084
Item title: Goodbye Uncanny Valley
Author(s) of the item: Alan Warburton
Entry of the item into the inventory: 23 October 2017
Inventor(s) for this item: PB 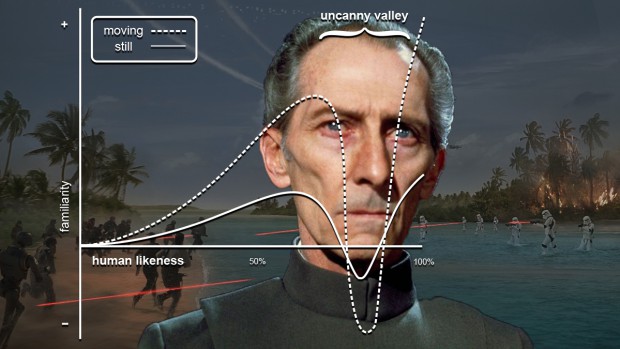 WP: "The uncanny is the psychological experience of something as strangely familiar, rather than simply mysterious.[1] It may describe incidents, for example, where an everyday object or act is experienced in an unsettling, alienating, or taboo context.[2][3] This experience is accompanied by a discomforting effect and often leads to an outright rejection of the object"

"In aesthetics, the uncanny valley is a hypothesized relationship between the degree of an object's resemblance to a human being and the emotional response to such an object. The concept of the uncanny valley suggests that humanoid objects which appear almost, but not exactly, like real human beings elicit uncanny, or strangely familiar, feelings of eeriness and revulsion in observers. Valley denotes a dip in the human observer's affinity for the replica, a relation that otherwise increases with the replica's human likeness.

Examples can be found in robotics, 3D computer animations, and lifelike dolls among others. With the increasing prevalence of virtual reality, augmented reality, and photorealistic computer animation, the 'valley' has been cited in the popular press in reaction to the verisimilitude of the creation as it approaches indistinguishability from reality."

Alan Warbuton: "It’s 2017 and computer graphics have conquered the Uncanny Valley, that strange place where things are almost real... but not quite. After decades of innovation, we’re at the point where we can conjure just about anything with software. The battle for photoreal CGI has been won, so the question is... what happens now? "